Working with Passion Pictures and Red Box Films, we designed the title sequence for Bond, Everything or Nothing. We were bought on board during the edit, having worked with director Stevan Riley previously on the Gierson award winning Fire in Babylon.

Stevan discussed his concept for the sequence, which involved seeing each ‘Bond’ through a gun barrel, and then pulling wide to see them all. We spent some time reviewing the original films to ascertain whether the sequence could be achieved technically. As the films span decades, this resulted in varying processes, techniques and styles, all of which needed to be composited seamlessly into one shot. And despite access to the Bond archives, we were unable to gain access to the raw files.  We then used the 2K final film plates and roto-ed each Bond out of their original gun barrel. This presented some challenges as the Bonds walked at varying speeds and thus were revealed within the barrel at varying points – however we were able to manipulate the footage (and time the movement of our own gun barrel) into a seamless sequence.

We were a little nervous about how fans would respond to the sequence, as they’re quite renowned at being expressive in their views, however the title sequence was received very warmly. It has since been used widely across the internet, and features on the Bond gun barrel wiki. 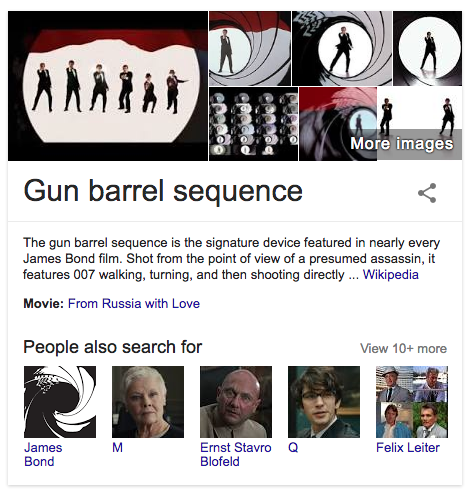 Further to the title sequence, we also designed over fifty shots and sequences within the film (including an additional 100 graded rostrums). One of the in film sequences we discuss in more detail here.

Go to Top
We use cookies on our website to give you the most relevant experience by remembering your preferences and repeat visits. By clicking “Accept”, you consent to the use of ALL the cookies.
Cookie settingsACCEPT
Manage consent