We were approached by Greg Barker to collaborate on his film, Legion of Brothers, detailing America’s first response into Afghanistan after 9/11. It is an incredibly powerful personal story which questions the nature of war, and the effect on those who served.
.
We’d previously worked with Greg on five of his previous films (Sergio, Koran by Heart, Manhunt, The Thread, Homegrown). Without the availability of archive on the specific events covered in the film, Greg was looking for a creative solution of telling these incredible stories. He was interested in developing a look for the film which wasn’t a traditional ‘war’ aesthetic, but was rooted in the memories of the returned soldiers.
.

We conceptualised and designed the title sequence for the film. The primary aesthetic we were exploring was the concept of memories, specifically memories which are influenced by PTSD. We explored our visuals in a state of unravel, and of destruction. We wanted there to be a softness of sensitivity, yet also balanced with the aggression of combat. The sequence also needed to provide some narrative details, to establish our characters and the teams they fought within, which were imperative to the forthcoming story. This went through several iterative processes as we balanced the weight of information necessary for setting the viewer up for the story, with setting the tone creatively. As the narrative of the film progressed, we were able to strip back the informational side of the sequence.

Furthermore, we also needed to visualise key moments from the film to include in the title sequence, for which archive was not available. Design director, Allison Brownmoore, explains, "One of the key moments for one of the American Teams was when they liberated one of the Afghan cities in the north. They did this on horseback! There's an incredible quote where one of the soilders describes this moment, it's quite poetic. When we heard this we knew we couldn't rely on substandard archive to visualise such a poignant moment. After researching maps and the terrain, we created our own overhead terrain map and created a 3D projection map of this in Flame. Using archive as reference, we then created twenty individual variations of Afghan and American soldiers riding horseback from an aerial perspective. Initially these riders were animated using the Adobe Creative Suite, however found the additional movement was less impactful than sweeping shots from above. We use the finished shot in the title sequence and a more substantial sequence in the film itself, and were really pleased with the final result. "

In addition to the title sequence, Blue Spill also delivered around 25 minutes of vfx and graphic sequences for the completed film. The vfx sequences, such as the horseback liberation above, and the infamous Tarin Kowt bombing, were often creative solutions to lacking archive. The graphical elements included lower thirds, narrative cards, character cards and end cards. We worked with the L.A. based edit for several months, including an on site meeting.
.
Legion of Brothers premiered at Sundance Film Festival, and received a two and a half minute standing ovation. We were very pleased to attend the premiere with the team, which included producers Greg Barker, John Battsek, Tresha Mabile and Peter Bergen, editor Robyn Schwartz, cinematographer Frank-Peter Lehmann and composer Philip Sheppard.
. 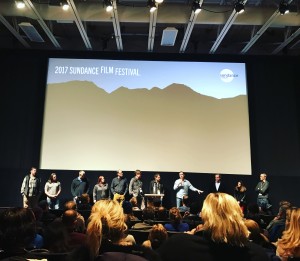